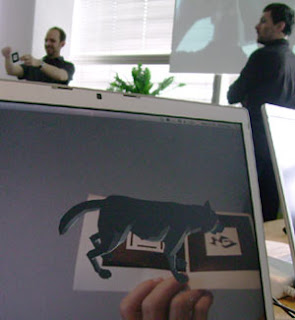 After some lessons in the opensource 3D modelling programme Blender and Julian's demo of Levelhead, we were introduced to the open source C and C++ language software library for building Augmented Reality (AR) applications: ARToolkit.
The ARToolKit was originally developed by Dr. Hirokazu Kato, and its ongoing development is being supported by the Human Interface Technology Laboratory (HIT Lab) at the University of Washington, HIT Lab NZ at the University of Canterbury, Aotearoa /New Zealand, and ARToolworks, Inc, Seattle. More info: artoolkit.sourceforge.net 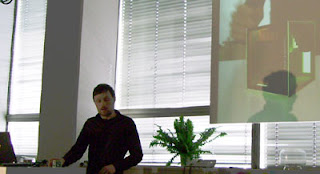 << Julian demonstrating his AR game, Levelhead. You hold it in front of a webcam and when it reads the markers on the sides of the cube, an image of a room and a animation of a white silhouette of a male figure appears. You navigate the figure in the rooms by moving the cube at different angles until it reaches different levels. 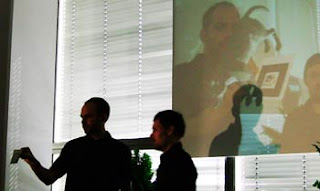 << Jonas + Julian show the how the simple type of marker works with an earlier version of ARToolkit than Julian used for Levelhead.

The ARToolkit Pro doesn't work on Apple computers which were supplied by Mediamatic. However I ended up - largely due to Julian doing 99% of the work, developing our game idea on my 2 week old Linux system on my laptop. 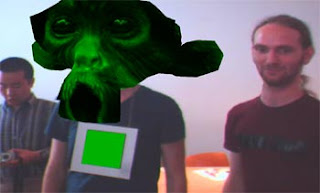 << Floris Schreuder (on the right) my partner for our AR game (left) Follow the Rainbow
The workshop also involved working in groups to develop a game, that hopefully utilized AR. The 9 of us worked on 3 games and there were two c ++ programmers in the group. I was absolutely delighted that in our group of two, I ended up being the "pretend" programmer for our game. I say "pretend" because Julian did the programming and all I did was play with variables. 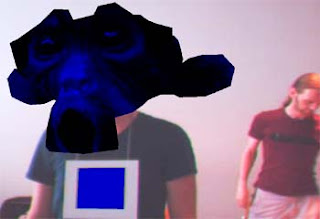 The goal of the game was to find the pattern (the rainbow sequence in order to change into an "angel", "superhuman" or "alien". So in wearing the marker (a feather) a 3D blender-made head would appear (here Floris used the default monkey head with some textures and for this prototype we just had one head) and this would change randomly when you moved into another space (such as taking a step).
<< Jelle van der Ster is the individual behind the mask 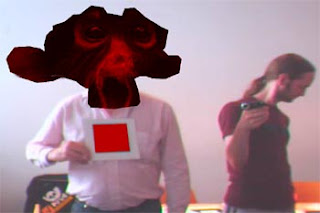 While the square of colour (over your soul/heart) changed meaningfully and was the real clue to follow. So part of our idea was the illusion or trickery (also fun) of following sensation or the face or what is most visually impressive rather than the more subtle indications of one's heart/soul. The head was not supposed to change colour, but, all this was programmed by Julian in between helping all of our groups, so it definately was a rush job.
<< Hein Eberson is the individual behind the mask

I was really pleased that Julian was patient with my questions and that I was able to follow most of what he did. Of course doing it myself is quite another story, but I'm inspired to pick this up again once pressing deadlines in my life are out of the way and then to see how far I can develop this game idea into something interesting and who knows, engaging :)
Posted by Sonja van Kerkhoff