More work on the "kāinga a roto" (boat-home) 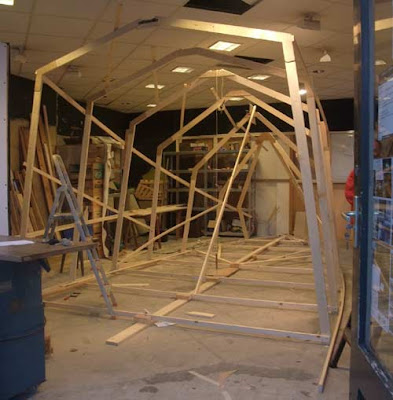 This photo shows that we have now straightened the frames so that they are vertical and started adding permanent braces which curve around the outside.

On Friday (17 September) we put in two tv dvd monitors and had these running to decide on the size of the windows we will build for these on the inside. We've gone for making the two first windows 19 inches. We also had the marante plywood cut which will be 90 planks, each 13 x 240 cm long, placed over and along the outer structure.

At the Gamma it took a man and a machine about half an hour to do all this. This was much faster than the 6 we cut using our bench saw, where all 4 of us held the large sheets. 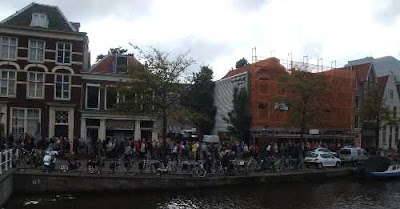 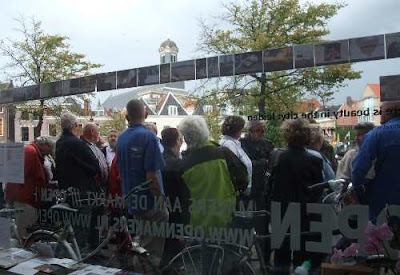 On September 16th about 6000 Leiden citizens registered at the Waag (medival weighing house, a few metres west of our building) for the annual, free herring and white bread (google "The relief of Leiden of 1574" to find out more about this. This article in Dutch is about this). Many of these spent a good 5-10 minutes standing in the queue outside our window. Typical comments were about how stupid we were building this, because it wouldn't fit through the door. One of the advantages in speaking English to each other while working is that, we don't need to respond as most assumed we couldn't understand them. The other common comment concerned expressions of surprise that a woman as small as I was was handling tools and seemed to know what I was doing :)

The people in the queue were of all ages, but going by their comments and the fact that they didn't seem to notice the numerous images and texts on the windows explaining in Dutch that this was an art project, obviously were people who don't visit art galleries. However we had a number of interesting and friendly conversations with some who did notice that the Leiden shoe-makers shop was now a studio + gallery for the "There is beauty in the city".

Labels: aalmarkt, beauty is in the city, installation, Leiden, Leideners