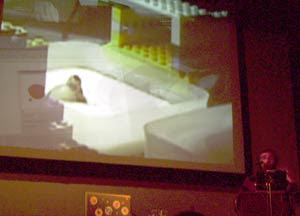 On October 16th I attended a seminar titled Games as tools. The first lecture by Friedrich Kirschner (www.zeitbrand.de/) who showed his Moviesandbox application for modifying characters and setting inside the Unreal Tournament engine. It was the first time I'd seen a mod that I thought went a bit more than showing off the programmer's skills. In his case, he had developed something so non-programmers could use this. (see: moviesandbox.com)

Above: Friedrich Kirschner at the Cinekid Games as Tools Seminar. This image shows how he dipped objects in milk to make a 3D (displacement) scan. He has instructions for how you can use this Milkscanner application for use in 3D environments here.

The next speaker was Daniel van Gils who showed an interactive project he developed for the VPRO (Dutch public broadcasting corporation with a focus on culture + art) children's programme Villapark.
There's a review about this event on the University of Amsterdam Masters of Media blog. The seminar was the kick-off for the 4 day Games-in-crossmedia workshop.

I went to another lecture a day later, given by New Zealander Julian Oliver where he showed his augmented reality box, Levelhead. Basically: a webcam interpretes patterns on a face of a cube and c++ converts these into a 3D image of a rooms, doorways and stairs which a figure can move about in. You navigate the figure's walking movement by moving the cube in front of the webcam.