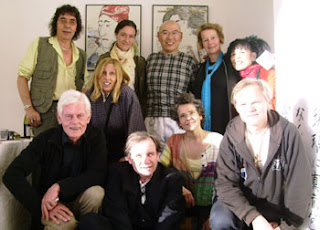 On a sunny October the 13th day, Sen and I went to our first art opening in many years.
The gallery has been around in Leiden for a while, but it is was our first visit.

Molly + Fred, who run the gallery were so welcoming, and in fact the atmosphere was great.

Some artists, curators, a small museum director, and Leiden visitors in the Expansionist Art Empire gallery, on the Nieuwe Rijn. 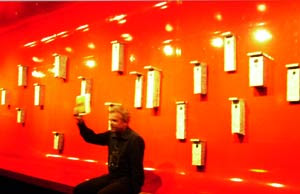 I also visited another Leiden gallery for the first time a few days beforehand. Gerda had told me about the RAP (Rijnlands Architectuur Platform) gallery, which focuses on architecture and art or art with a some connection to space. I liked the idea of this Leiden artist's project, Stadsvogel zoekt huis (city bird seeks home), where everyone was invited to submit a sustainable birdhouse to be added into the space ove a period of two months.

Fredy Beckmans (in the photo) has made 1000s of birdhouse reliefs for the past 10 years. For the lecture/opening, he made a performance of taking out loose pages out of an artist book of his, which he then opened up each page, to reveal an image of a bird. Then he dramatically crunched each up into his fists. The acoustics of the narrow space were really good, as the sounds of crunching and smoothing made each page seem like a tactile experience. He then held up each straightened out page displaying the creases (and materiality of the page and bird image). Finally he refolded each of the 5 or so pages. Now he announced the book was much fuller (with creases and all). 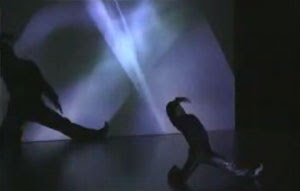 The rest of the week was filled with some freelance web design work and the 3 courses I'm taking. For one of them, for an exercise in sound synthesis, I came across some brilliant interactive / sound work by the Japanese musician, composer, programer and improvisation performer, Chikashi Miyama. He's got a few interesting videos on YouTube at: www.youtube.com/user/chikashimiyama