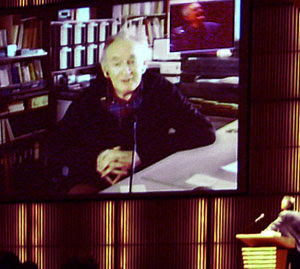 I attended this event on January 27th in the Amsterdam concert hall on the Ij.

Dick Raaijmakers (1930) live on the screen via a webcam from his home, while Arjen Mulder (a Dutch media theorist and one of the co-author's of Dick's new book (Monografie: the website is only in Dutch).) asked him a pile of questions. In one of the stunning auditoriums in the muziekgebouw aan't Ij,

Dick Raaijmakers, one of the pioneers in electronic music in the Netherlands, is mainly known as a composer, who has made numerious installation-performances involving electronic music or sound where visual aspects are part of the artistic production.

I know of him mainly because of a lecture I heard in 2006 in at the Eindhoven Strp festival, given by Kees Tazelaar, where I heard his compositions and saw his revolutionary 1960's animations.

Some interviews with Dick Raaijmakers are here on the v2 website. 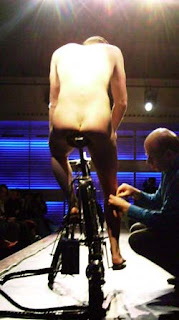 See this arts blog (in Dutch) for a series of photos of this performance.
Posted by Sonja van Kerkhoff