some home entertainment + an exhibition opening 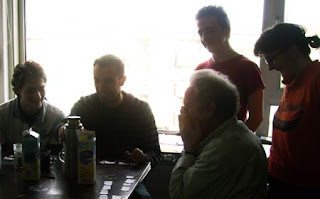 A number of Leiden Bahais and friends cycled over to our place and our entertainment was to give them creative tasks until they realised that what they were really doing was doing our housekeeping. It was a lot of fun and the fridge got cleaned, the washing put out and the kitchen was tidied up.

For each task, each person received a letter and their task was to work out what the word was. 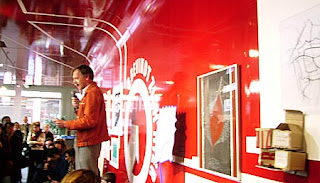 Then we all cycled over to the opening of U Bevindt Zich Hier at the RAP gallery.

It was very crowded! The curators, Sanne + Jos did a brilliant job on PR, display and the whole look and feel of the show in a very difficult space. The red wall and ceiling is a permanent part of the space. 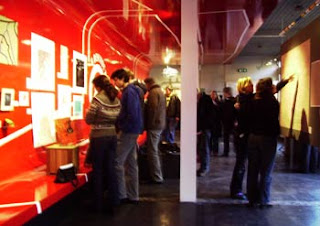 Daniel Lehan was one of the 12 short-listed for a prize. The winner was a boy who made a skater's map of Leiden. Daniel's work "This makes no sense" is the narrow work in the top row on the left. It had these words printed over a map of Leiden and referred to the fact that having never visited Leiden and not reading Dutch, this map made no sense to him. 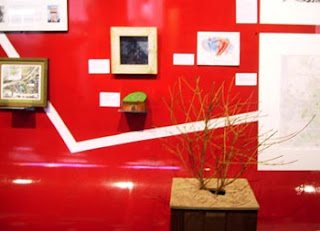 Two other London friends
also had work in this show.

Ella Guru's is on the left and relates to her visit to Leiden last year and the discovery that the prilgrim fathers, her ancestors, had lived here before emigrating to the U.S. Elaine Arkell's is the red + blue small print on the right. Her work, The Shift, associates the circular streets and canals of Leiden with blood vessels.
My work is the deep frame in the middle and Sen's is the shrub with the engraving below.
Posted by Sonja van Kerkhoff