is coming along. Eric Kuijl and I have been working on this for the Hague Conservatory ArtScience Research group, "Virtual Communities" for the past month.

Basically we have been learning Cinema 4d and then it was a 3 day crash course in the game engine Unity. It seems quite amazing programme, with just one major drawback. You can only use it on an Apple operating system. 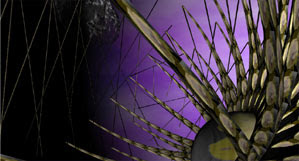 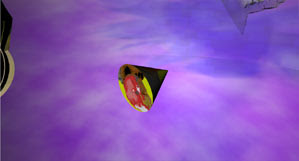 Now all 4 or 5 worlds in our group are to shown on the final night of the
Heiner Goebbels Festival in 5 days. A bit tough, when we can only work on the project at the art school because we do not have Apple computers. But it'll probably work out. Mainly because Wim is so helpful and the class is so small.
In being asked to relate our work to the contemporary German composer, Heiner Goebbels, in some way, I've used images of his head in the forms I've made. So if you look closely you'll see his head repeated on the 'spikey' rods of the spidery flower form. Likewise on the animated cone.

Our idea was to create a world of "attractions" hence the title "Magnetica" for our planet. We have also used sound clips from his composition "Surrogate Cities" for sounds in our world.
Posted by Sonja van Kerkhoff