Festival of new music in the Hague 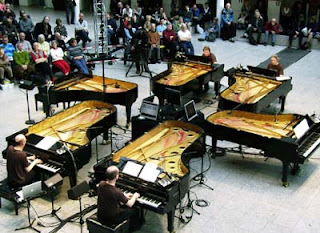 On March 15th, there were two performances in the Hague City Hall. The first was Six Pianos by Steve Reich and the second was the hour long piece Crazy Nigger by Julius Eastman which began with 4 pianists (see image on the left) and finished with 12 pianists on all six grand pianos. It sounded awsome.

The festival is a day long event which occurs several times a year. The website is only in Dutch.

And late that night, our work was on the screen for about 20 seconds in a theatre in the conservatory :) You can play in our world here
Posted by Sonja van Kerkhoff