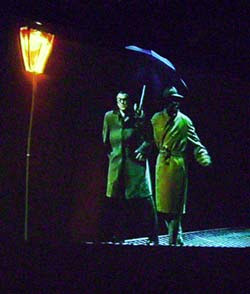 I am taking a course in "electric music theatre" which consists of Paul Koek showing and discussing some of his many impressive productions.
The first was Hermans Hand, which premiered 19 October, 1995 in the Spui theatre as part of the in Festival in de Branding in the Hague.

The theatre piece is a hommage-critic-farce of the Dutch novelist, W.F. Hermans, played by Hans Dagelet (the man with glasses). It begins with slow motion performance of two men walking in the rain. The only real water is that splashed dramatically by a passing motorized car wheel. Each time of the 4 times, the two men were soaked and they responded with slow motion shock and horror. Behind them street lamps moved very slowly, suggesting a progressive movement the two men did not make along the platform. It reminded me of Raaijmaker's performance I'd seen in January where motion is so slow normal vision doesn't register this as movement.

Next the two are in a cafe, being served microphones as well as drinks and what you hear (via playback and excellent acting) is the exact text of an interview with the novelist recently (in 1995) aired on Belgium television.
The interview focussed on Herman's hand which was in a bandage and Herman's claim that he hurt it picking up a typewriter at a second-hand market, but the text was dominated by Herman's ranting and vicious comments about a theatre-maker (clearly a reference to Raaijmakers) who made nonsense out of mechanics.

However the main theme of this theatre seemed to centre on the fall (failure), a recurring theme in Raaijmakers' work, where in the 3rd act Hermans' literally falls in very slow motion, as he stretches his arm out, here aided by being attached to a support, powered by a steam engine (you see pumping away), which gradually lowered his body towards the typewriter on the ground.