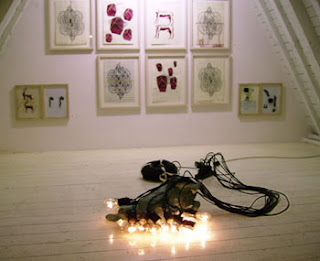 First I was at the opening of Territorial Phantom in the Dutch Institute for Media Arts. I was impressed by the film Mary Koszmary by Yael Bartana set in an abandoned Polish stadium.

During the years of the Polish Republic (1921-1939) this stadium was one of the favoured locations for political rallies and street festivals. The speech reflects the aesthetic of nationalist propaganda films, but its content runs counter not only to the style, but to everything on which that style is based. The speaker wrestles with the form, revealing how much we are still hampered by nationalistic codes. He speaks before an almost empty stadium. Sierakowski, the speaker, describes the cultural and linguistic consequences of the departure of the Jews after the Second World War to Israel, and calls on the Polish Jews to return to Poland. See the gallery website for more. The show is on until May 12th.


Then I went to see Joseph Semah's performance, The Doubling of the House (see the image above) at the Galerie Ferdinand van Dieten - d'Eendt. I love his installations combining drawing, objects and often some form of lighting, along with references to the metaphysical. 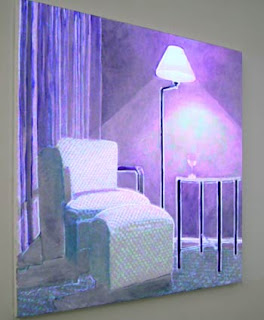 Then I went to see an opening at Arti et Amicitiae.
Arjo, Marja and Astrid curated the digital view: an exhibition by 21 artists.

Astrid's painting (left) was a subtle changing patterns of elements. It was quite meditative and extremely well-crafted. The timing of the animation was so well done that effect of the artwork seemed create an existence between the what I would call 'static and painted' and 'mutable and animated'.

I met Arjo + Marja in March last year when they did a project in Leiden.
See their digi-paint website for more. 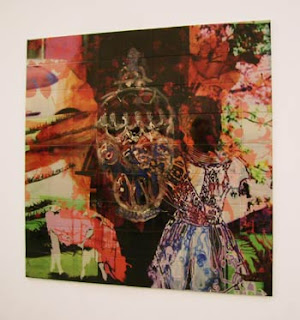