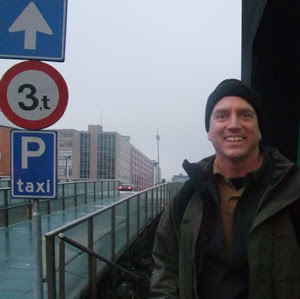 Daniels blog says it all.
This is Daniel in front of the underground Leiden station bicycle racks.

His blog shows images from our neighbourhood supermarket and one of the mosques. 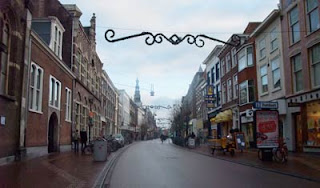 Later I took him by bicycle through the city to the Breestraat (the street shown in the next image here) on which is the Waalsekerk (Wallonian Church) where Tama had his lessons on the 1746
Gerard Stevens organ. This building (the photo here, shows the edge of the church on the far left) hails from the 1400s with major renovations in 1737-39. See Daniel's blog for images of this.

That evening we filled the living room with 16 people! It began with a dinner and moved onto two rap numbers by Olivier, then piano by Tama and then violin by Toroa with some slides. Then Daniel delivered his slide-lecture on Ethnomathematics.

And his photos of the whore :) frost around our place. On Jan 9th, Daniel and I cycled around Amsterdam. Here are gulls on ice on the Oudezijds Voorburgwal. See Daniel's photos of Amsterdam and of the Homo monument. (www.homomonument.com)
Posted by Sonja van Kerkhoff