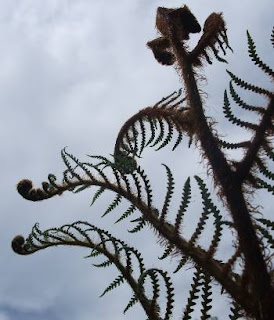 I arrived in Auckland on January 21st at 5 a.m.! My aunt Sue met me and we spent the day together. It was fantastic to be home again.

>> Detail in the Manuwera Sculpture Gardens

Still adjusting to a different time zone, I went to Jane's birthday party on the 22nd and on the left are a few photos of some of the music that was happening.

I spent the morning of the 23rd meeting a few old Tahorites and then headed off towards the Auckland Folk festival site. Jeff had warned us to take a different route because someone had been shot by the police on the motorway.
It felt like a scene out of a Western. 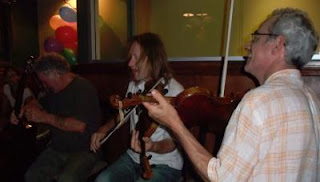 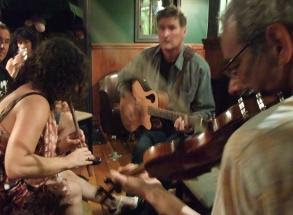 Arriving at the site, I found it to be much bigger than I realised. So in the end just found a spot for the tent under some trees. Enjoyed my time at the festival wandering from place to place. A jam session (me on clogs) with Peter, Simon, Fiona, Richard and others late one night was particularly memorable. I also spent a lazy afternoon at Jeff's, drinking coffee and sorting out a paper that had been accepted for a conference.

Funny to see so many vaguely familiar faces and it was lovely to catch up with old friends.

I also videod vigorously and took heaps of photographs, for possible future art projects and with my current video project on migration in mind.

A day after the festival Michael took me to breakfast on the back of one of his Harley-Davidsons. What a blast zipping along Devonport.

Above: The Penman Family (David, Chris, Thiea and Jack) perform at the Auckland Folk Festival (They have a cd out - a fab English trad collection!) 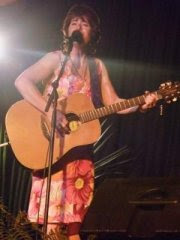 Left to Right: Auckland Folk Festival:
Blue Grass musos jam along with Tracey, a loose group of Tahorites jam, session with Peter, Fiona, Simon + Richard and others, and Tracey Haskell performs on stage. 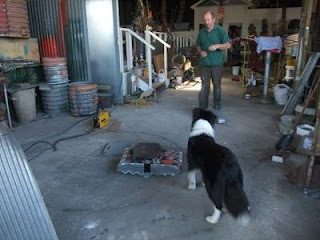 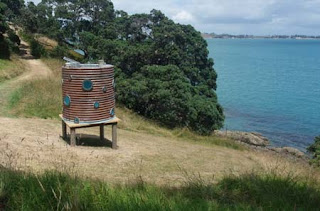 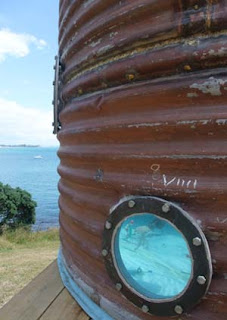 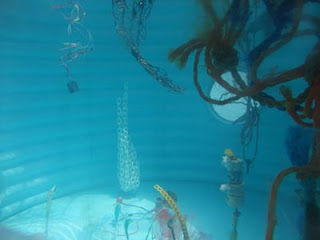 On January 28th I went over to Waiheke Island to see the Headland Sculpture exhibition.


Naturally I thought Jeff's was one of the better works!
His is this water tank containing a choreography of debri (waves were created by the solar panel at the top). Jeff had salvaged this debri from the sea below this location after a boat fire a year or so ago.

Met up with Paul Cullen, an artist I'd met in South Korea in 2004 and then spent the evening with Elizabeth discussing film. On my final day I met with various gallery people and thanks to Hilary heard James Luna's inspiring talk before driving in Jeff's car to Hamilton. At Hamilton met up with an old friend Chris experiencing family life with hens and a huge backyard!

Filipe dropped in on his way north, showing me some images of his latest work for the New Plymouth Natural History Museum.

Then while driving at 80 kph, the bonnet flipped up smashing the windscreen. Fortunately it was an easy car to drive, so I could slow down and stop and managed to use the edge of the jack to fix the bonnet shut again. It was a nerve racking drive for the next half hour or so, while I looked for a place to ring my sister from. But after that I realised that the windscreen probably wasn't going to get any worse and then sped up again and took the "Forgotten Highway" route via Tahora to Taranaki. It was a magical drive even though driving on loose gravel isn't my cup of tea.


Canoeing and cycling along the Whanganui River: 10-16 February 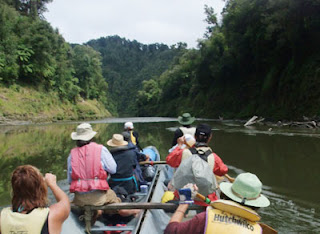 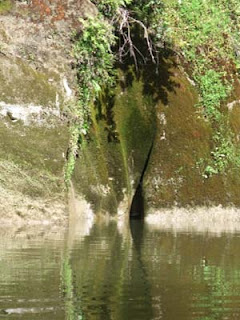