I thought I'd make this a post about some of the creative initiatives happening in my city, Leiden, in response to the Dutch government announcement to cut all culture and arts funding by 20% (c. 200 million Euros). They also announced that they will also remove the reduced sales tax for art and culture (from 6% to 19%).

In response to this a national day of protest called, "Holland screams (calls out) for culture" (Nederland schreeuwt om cultuur) was held throughout the Netherlands, on November 20th. In most cities people gathered to 'cry out' or 'scream' -very fitting given that the government just announced just a major cut to all arts funding in the Netherlands.

The website for collecting petitions of protest, enabled you to scream into the microphone, while this page has films and photographs of the day of protest.

The Leiden city councilor for culture, Jan-Jaap de Haan the second speaker (here at 3'10" in the video in link above) spoke very well: he wanted to sing, but the orchestra is gone, so he has to scream and asks why is culture perceived as a left-wing hobby. Culture informs and shows who we are. The government is focussed on what we are not (very apt reference to the government focus on the fear of migrants and anti-Islamic sentiments).

It made me realise, that yes, without culture, expression becomes noise -yelling and screaming.

It's ironic that the news today is that yet more criminal records have been revealed of members of the Dutch parliament in Wilders' right-wing extreme nationalist party (PVV 'party for freedom' - oh so Orwellian!).
So the current cabinet remains in power, if Wilders' doesn't remove these individuals who lied about their past 'convictions' (!) from his party. Two weeks ago one member of parliament left this same party because he didn't want yet more limelight put on his past. Ironic that a government needs these people in order to remain in power.

And so to Leiden:

is a blog run by Jeroen Maters which often has ideas or thoughts or reports on cultural related issues in Leiden. 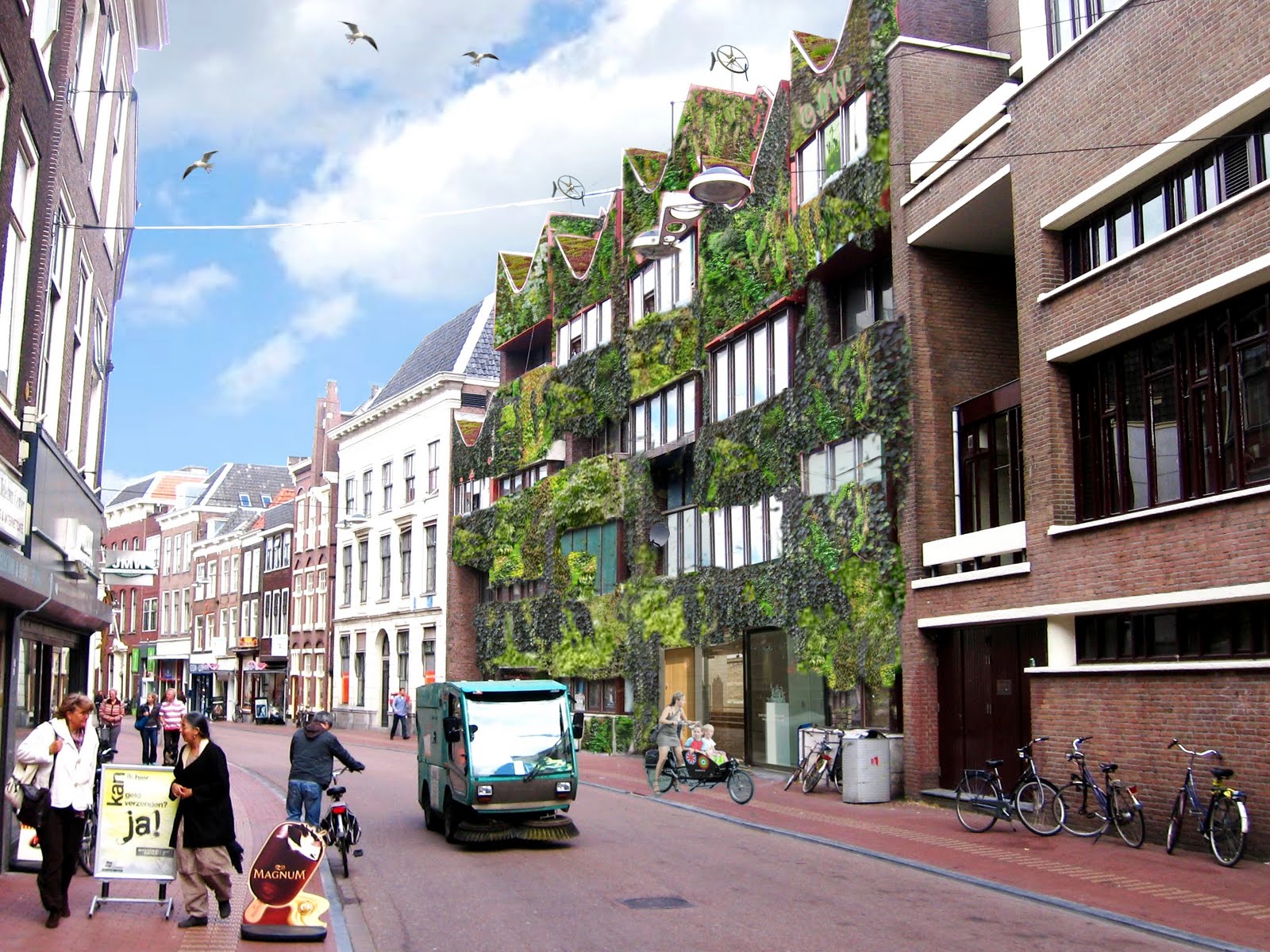 The 24 Nov blog concerns creative ideas for some ugly architecture along a main street, and his idea there is for a vertical garden. I came across this via the Linkedin Leiden Network group in response to a call for suggestions for this empty block.

The old post office next to this block is now used by a collective of artists as a gallery, de Pieter, which focusses on group exhibitions by Leiden artists.

As a result in the down turn in the economy in the past year or so there are more empty spaces in the centre of the city, and so the artists here are able to pay a low rent to the city council for this space. Below is another arts initiative ultilizing empty shops.

Early in 2010 I first heard of OpenMakers which provides temporary studio spaces in the centre of Leiden utilizing empty shops.

In September + October Sen and I built our installation in one of these spaces. What is so great about their project is that it is interdisciplinary and invites artists from all levels to have the opportunity to work on a project. So far there's been theatre, tango, fashion design, poetry as well other visual artists.