Change is a Law of Nature 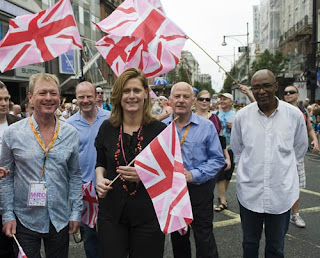 About a month ago similiar photographs to this one featured on the front pages of newspapers in the U.K. of Sarah Brown, wife of the British Prime Minister taking part the London Pride March on July 4th.

And for a blog I wrote, I was generously given permission to use this photograph by London-based photographer Marco Secchi (www.marcosecchi.com)
More of his brilliant images of the march are here.

The blog is an attempt to get Bahais to discuss the implications of equality and justice for the LGBT community. Many Bahais believe gay Bahais can't have partners let alone marry, so that's the background to my blog where I'm looking at what the Bahai Writings say about religious law and communities being adaptable and changeable in response to the conditions of society.
There's also no Bahai Scriptual basis for this homophobic attitude, because Bahai Scripture is only the authenticated writings of Abdul-Baha, Baha'u'llah and the Bab and official interpretations of these by Shoghi Effendi. However the real issue I think is, for Bahais to look at where did these ideas come from and what Bahai principles could possibly support such an attitude if they are serious about the Bahai principles of equality and justice.

It is here, and if you have any responses to the blog, feel free to post these anonymously if you wish. In April 2010 I collected some of my posts together from Bahai Rants and put them in chronological order on my Just a Bahai blog.
Posted by Sonja van Kerkhoff

"Arsham Parsi is the founder of the Iranian Queer Railroad (IRQR), an organization that supports Iranians who have fled their country due to Iran’s harsh punishments against gays and lesbians. IRQR provides support ranging from safe houses and funds to education about rights."