"OpenLuchtHotel" was a great success despite the storm 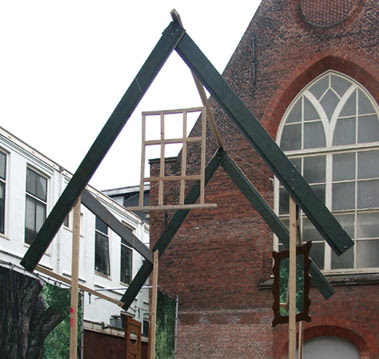 Scroll down this blog to views of our bed for the Fields of Wonder (this links to their website), Plein Air Hotel event (theatre, music, dance followed by a sleeping in a bed in the open air).
Most of the 36 beds were situated in the Leiden Hortus Botanicus gardens (about 10 minutes by foot south-east) and ours was in the courtyard flanked by two 15th century buildings from the days these served as part of the Aalmarkt school for the poor as part of the "Sint-Catharinagasthuis" complex for the poor of the city of Leiden. See my blog for June 18th for more about the history of this location. 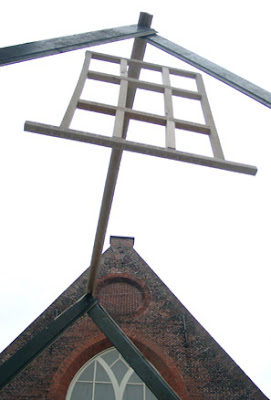 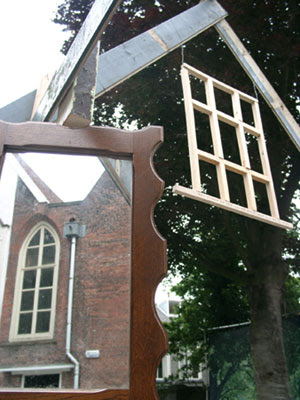 "Room of Memories" by Sen McGlinn and Sonja van Kerkhoff (www.sonjavank.com/sensonja) is a house-like structure inside which a double mattrass was fitted. It was made out of wood and old furniture found on the streets of Leiden in May 2012 except for the suspended window which was made from sticks engraved with texts from wood Sonja collected in Romania in 2002. The text which could be read from the front read: "Trees that yield no fruit have been and ever will be for the fire."

The mirror swivels around and we made some hooks for hanging clothes and there was a small platform for glasses.

We had a few hiccups in building this work because we didn't get permission for the actual location in this courtyard until 10 days before it had to be finished and then we could only begin construction on site 4 days beforehand. However the construction went very fast and it was so easy to work in the OpenMakers studio, so in retrospect it all went very well and we discovered that our work could also be quickly relocated as well.

The weather forecast was for heavy heavy and wind and so we needed to make a plan B.

The four of us easily lifted the whole house and moved it to underneath the concert hall verandeh and then we made covering for the south-westeries that were expected. 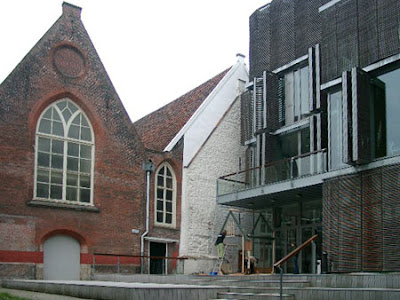 Because these were paying guests (100 Euros per couple) we felt they needed to have a plan C and so we made another double bed inside the OpenMakers studio as well should they decide that sleeping outside was too cold.

Then it rained and rained. Everyone got wet and many beds were soaked at the Hortus Botanicus but the rain stopped by 11 p.m.

Our guests wanted to sleep under the stars and to take the risk of getting wet, so the four of us quickly moved the bed-house back into the middle of the courtyard.

Meanwhile our 'reserve' bed was used by another couple because some beds were too wet to sleep in at the Hortus Botanicus. They slept between a piano and a park bench in the studio and Sen even mopped the floor to make it a nicer atmosphere for them. 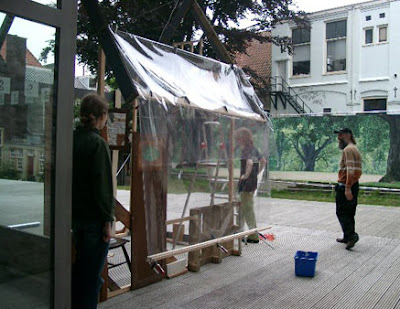 << We put plastic coverings over the front and side and they were needed. Just as we finished the rain poured down and so Sen's clever angled shelter for the front proved to be necessary to stop the rain beating into the interior. 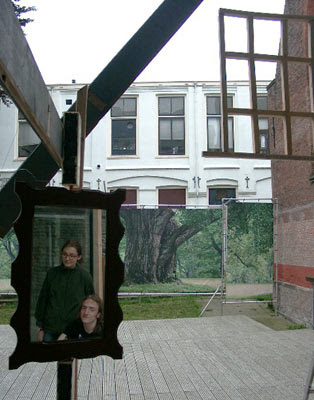 >> A new view from underneath the verandeh. Carmen and Tama 'in reflection.' 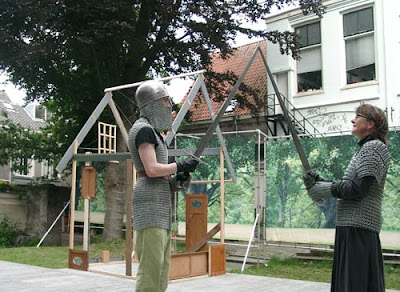 << And earlier that afternoon Tama and I did a performance which Carmen and Sen filmed. More to come about this in July. First we are now working on our next sculpture, a 9 part dome-like temple for reflection.
Posted by Sonja van Kerkhoff