"Room of Memories" on location 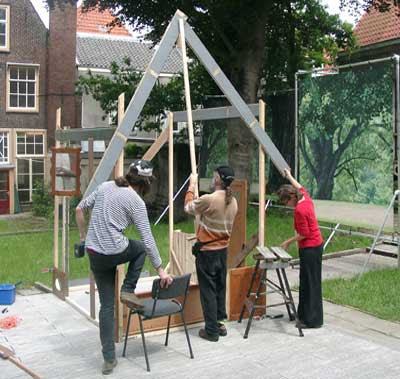 18 June: Robbert Pauwels (sculptor in another of the OpenMaker studios) helped and Jennefer took photos. First we worked without ladders and with 3 directors.

After we had the first eave in place, a manager from the Concert Hall emerged, worried that we might be silly enough as to put nails into the wooden terrace. 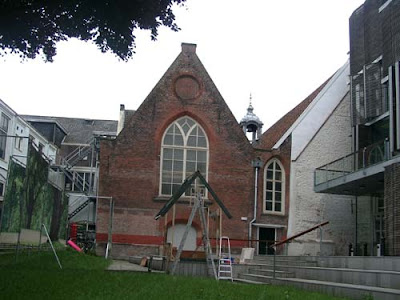 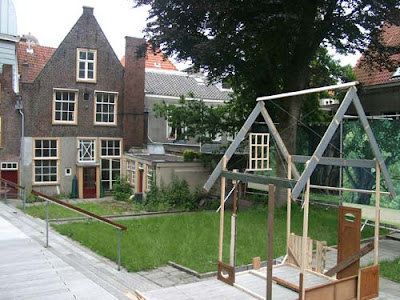 He then lent us a ladder and gave Sonja a mini-tour of the Concert Hall Chambers while we looked for the ladder. A truly impressive building (see their programme on this website (in Dutch only).
The front entrance dates from 1826 (see photo of this on wikipedia) and the terrace at the back is a later extension. Next to this is the "Gasthuiskerk" (visible in the photo on the left - the church was part of hospital and poorhouse in the middle ages but these days serves as part of the concert hall chambers), and while we were working we heard an organ being played which was from either this church but more likely from the one next to this, the Waalsekerk which has amazing organ which Tama played on once a week in 2008-9. The two buildings (see photo on left) on the northern side of this courtyard also date from the middle ages and were part of what was known as the Aalmarkt school which in turn served as part of the "Sint-Catharinagasthuis" complex for the poor of the city of Leiden. 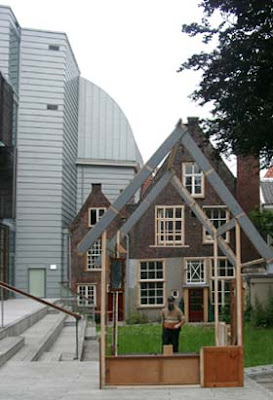 And now the framework for our "room of memories" is almost finished we will work on the bed and bed covering, which will fit exactly into the inner space. The window that hangs above bears engraved texts: "Trees that yield no fruit have been and will ever be for the fire." and "Possess a pure, kindly and radiant heart, that thine may be a sovereignty ancient, imperishable and everlasting." (these and the other texts you can see in part if you stand underneath the window and look up, come from the Hidden Words by Baha'u'llah, and on the left there is a mirror which turns reflecting the inner and outer memories :)